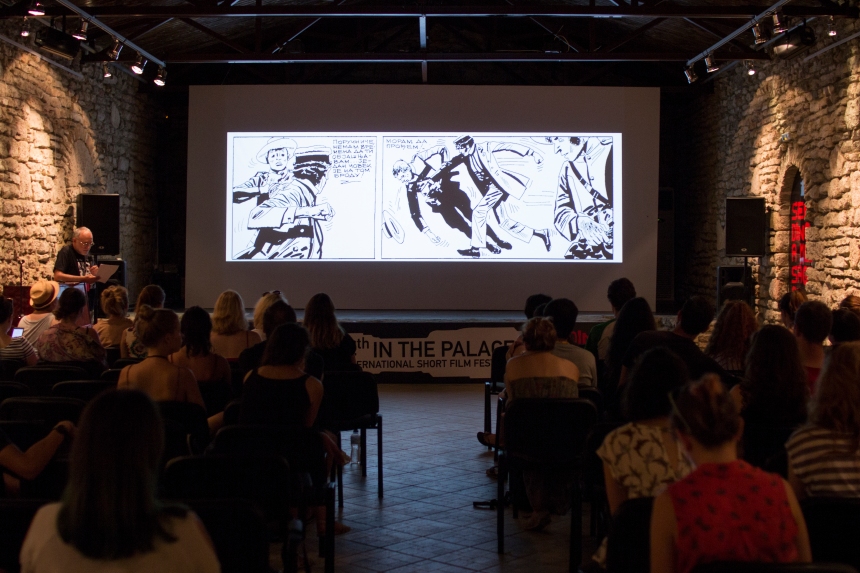 On the second day of our workshops, we received a lecture by Rastko Ciric from Serbia about graphic and visual codes of comic strips. For anyone into graphics, design and illustration this was a useful summary of how to code meaning into a comic strip.

In a simple yet effective overview we learnt basic meanings, for example that the different frames represent the passing of time. Sometimes the creators play around with the outlines of the frames, having the characters touching the walls or stepping out of them; a similar way of how ’breaking the fourth wall’ is done in filming.

Representing speech is another key element of comics. The most conventional way is having the image and the text underneath. Ciric then went on to describe the different styles of speech bubbles and the difference when representing conversation or thought, loudness or sound effects/music. Similarly, the way actions and feelings or emotions can be shown through the graphics by simple lines or colour.

An interesting topic as in no other media can you see such graphic presentation.

The third day was a screening of a film written and acted in by one of our very own EVS participants Nikola Kuselov. His film, Horse Riders, is a feature length film on the topic of happiness and what we need to be happy, whilst also touching upon the lives and issues of the homeless.

The film follows the story of a handicapped boy called Muppet and his friend Alec (played by Kuselov) who attempts to look after him and provide for him as they try and cope with life on the streets. Their lives quickly change as they meet Sarah, a girl running from something.

The very human characters make the audience connect with their stories, while taking a deeper and thought-provoking meaning from the narrative. A thoroughly enjoyable morning watching the work of one of our own.

In our fourth workshop today we had David Wilkinson from the UK talk to us about how to succeed in the film industry. With many of us just starting out, listening to someone who has worked in basically every sector of the industry was valuable experience.

He discussed many things that help when trying to get your film out there. One of the most important was networking. You should attend as many networking events and film festivals as you can and if there are people you know will be attending, do your research so you know what kind of projects they’ve worked on, start conversations about their work and your own ideas or projects you’re working on, then afterwards be sure to keep in contact; with social media there’s now no excuse not to.

When working on someone else’s project for experience, work hard, put the effort in, because then the people will recommend you to other people looking for help with their projects. People talk and if you become known as someone who doesn’t want to put the work in, then you’ll quickly find noone wanting to take you on.

In terms of the future of film, Wilkinson suggests that a good thing for budding filmmakers to get into is Virtual Reality (VR). This up and coming industry is still small with a lack of people who understand the technology and are creating films within it. He might have convinced some of our budding filmmakers that this is the way to go!

Excited to see more of what’s to come in the rest of the week!

A professional in the field of public relations, media and communications.