Can you believe it, we are already on the fourth day of the 14th IN THE PALACE International Short Film Festival!

So let’s see what happened yesterday, on the third day of the festival.

We started the day at 10 o’clock with a lecture by Rastko Ciric, who is a Serbian multimedia artist and educator. He held a lecture on comic strips and the rules that define and restrict their language.

At 3 o’clock we started with the Fifth International Film Competition block. We watched 6 movies: Deep waters, Potapov’s conjecture, A bit normality, Nirin, The last trick and Ms. Liliane. The public favourite was Potapov’s conjecture, a Russian fiction from director Mark Rasskazov. In the movie, we meet an ordinary security guard and his daughter. We then see Potapov’s character develop and he finds the solution to a famous mathematical puzzle. I really liked all the characters and relationships between them. I also enjoyed that the movie was quite unpredictable. 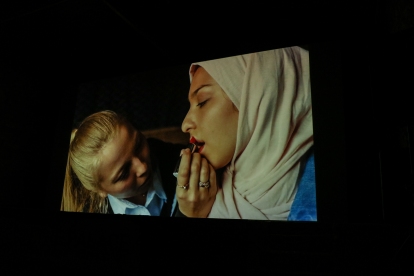 The movie that touched and shocked me the most from these six was Balcony from British director and writer Toby Fell–Holden. The film is about a teenage girl from a neighbourhood with a racial tension, who falls in love with an immigrant girl from Afghanistan. The movie has a big twist and it really shows us what rumours and prejudice can do to a person’s life.

At the end, we also had the opportunity to meet Borbala Nagy, who is a Berlin-based filmmaker with Hungarian origin. She wrote and directed a short movie that we watched in the second part, Somewhere Else, so the audience was able to ask her in person all the questions that the movie brought up.

But the day was not yet over, so we continued with Second National Film Competition block. We watched five Bulgarian movies: Pulse, The House, Red Light, Carnival Games, and Solstice, which were all fiction. From this part, the clear winner for me was Red Light, from director Toma Waszarow.

The start of the movie was pretty slow but it really developed into a great comedy without trying too hard to be funny. The whole room was laughing and the movie left me feeling really good.

At the end of the session, we also talked about the movies and different issues that were portrayed in the movies, specifically about euthanasia, which was also discussed in the movie Pulse. After that, it was time to have some fun! We enjoyed the party with DJ Angel Funkusion, who has been one of the most influential figures in the vibrant Sofia music scene for the last 10 years. 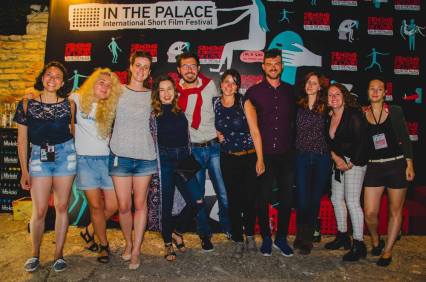 After we danced, sang and laughed, it was time for movies again. We started with screening of the second part of the nominated short moves from EFA’s 29th edition in its ON FOCUS programme. This night we watched five movies: A MAN RETURNED by Mahdi Fleifel, THE FULLNESS OF TIME by Manon Coubia, SMALL TALK by Even Hafnor and Lisa Brooke Hanse, EDMOND by Nina Gantz and THE GOODBYE by Sergi Moreno, Tono Folguera.

So this was all for the third day, stay tuned for more information in the next days.

Alja, 26, coming from Slovenia. Student of life, always yearning to learn, to improve myself. Lover of arts, appreciating beauty and esthetics. I studied cultural studies and anthropology and now I am here to learn about new cultures, meet people​ and to hear new storeys.